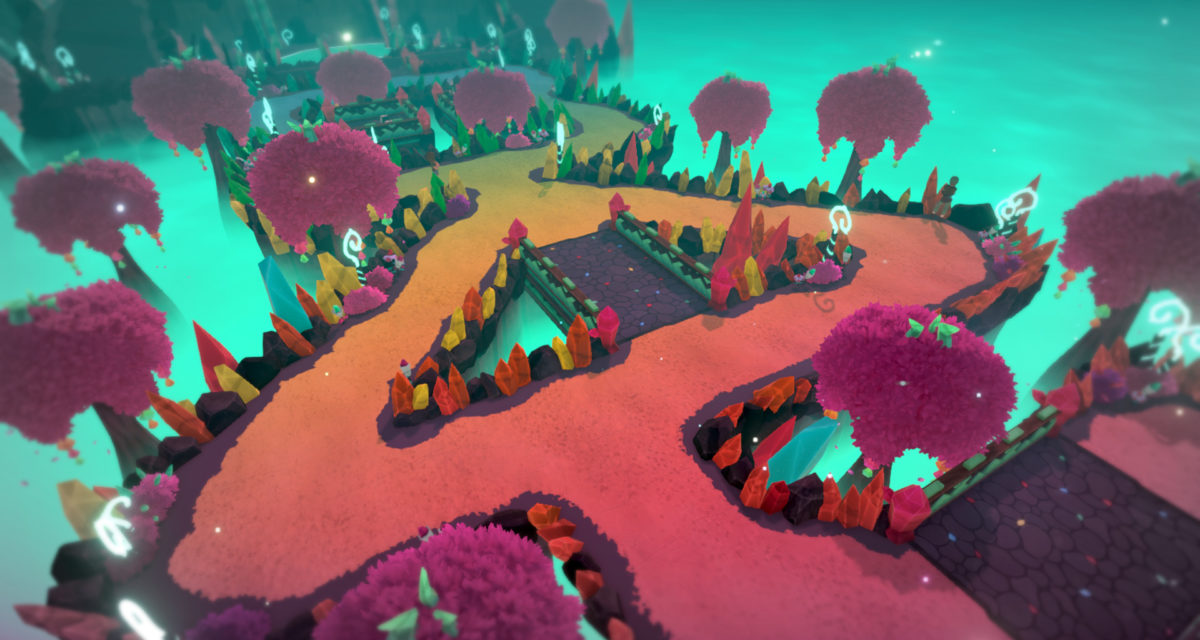 Hello Tamers! We’re here today, as is our custom, to share some insight about the process behind the latest Breeder (remember: the Backer tier, not Mimit) additions to the world of Temtem!
For those unfamiliar with the term, Breeder Backers are Kickstarter Backers whose unique perk was to design a Temtem line, and a route. Follow the links to read more about previous Breeder tems and routes! The Cipanku update gave us the popular Pupoise and Loatle, while patch 0.7.2 granted us access to the beautiful Gardens of Aztlan.

Let’s start with the tems!

These Digital wonders were recently added with the Cipanku update, and always make an appearance when asking the community about  their favorites. They were first brought to the table by our Backer Tutorxic, who approached the design team with the idea of a two-stage Temtem based on turtles, with a voodoo doll theme. 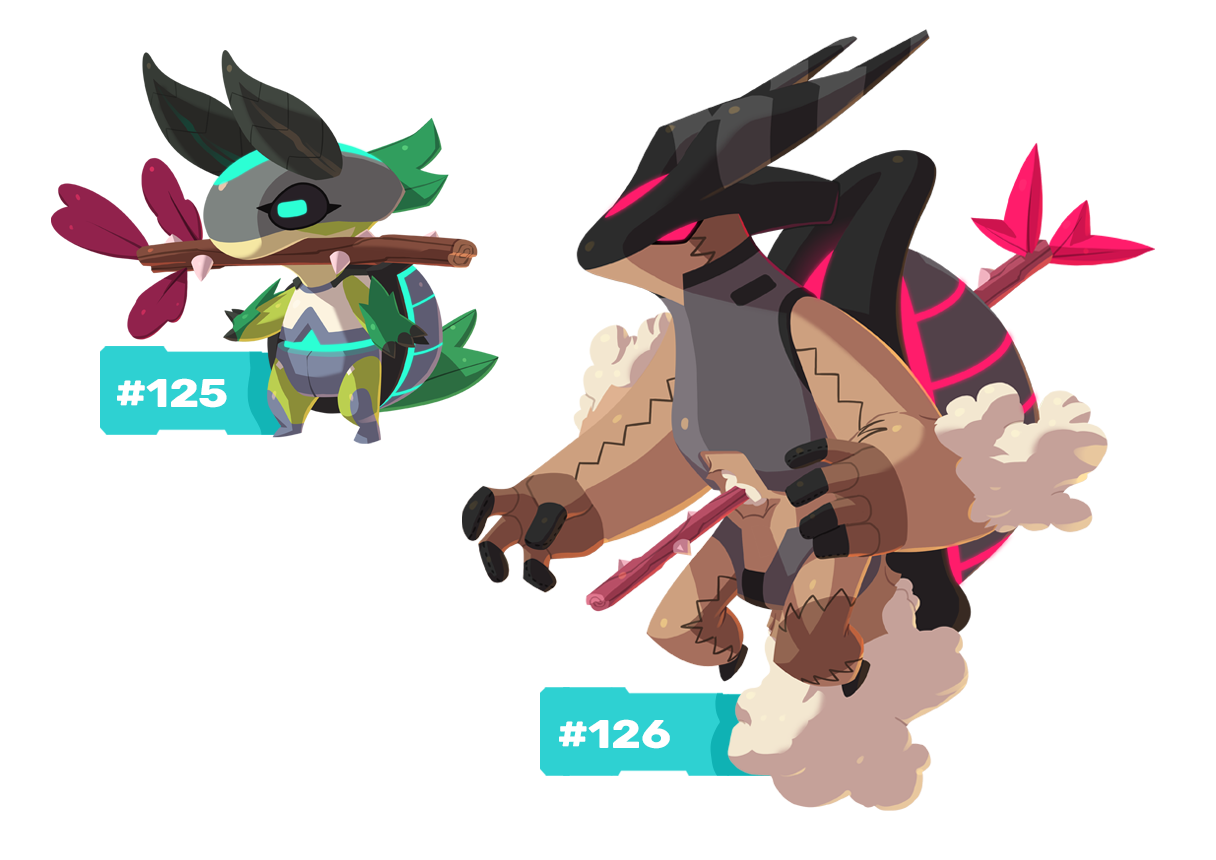 There was a lot of initial debate about the typing for these two: the final stage had to be a Mental Tem because of the voodoo theme, the floating and the psychokinesis. We weren’t sure, however, about the typing for the initial stage, because it didn’t fit the Mental type, and also because there was a drastic change between both forms. We learned that one of Tutorxic’s favorite types was Digital and we took that route, because Digital tems offer unmatched design freedom and allow us to justify huge changes such as this. Thus, the first stage was written down as Digital/Nature, while the final stage was Digital/Mental, with some shared elements like the stick, the glow of the shell and the horns.

The design was a bit on the open end of things, and the original references required a lot of adaptation to fit in the Temtem world. For the first stage, Tutorxic wanted the tem to hold a stick in its mouth, and wanted to see that same stick in the final stage, floating by effect of psychokinesis. This is the batch of possible approaches created to see which one scratched the itch better. We followed the stick-in-mouth perspective, but also explored other options with 100% less stick. It was, nevertheless, up to the Backer’s final verdict. 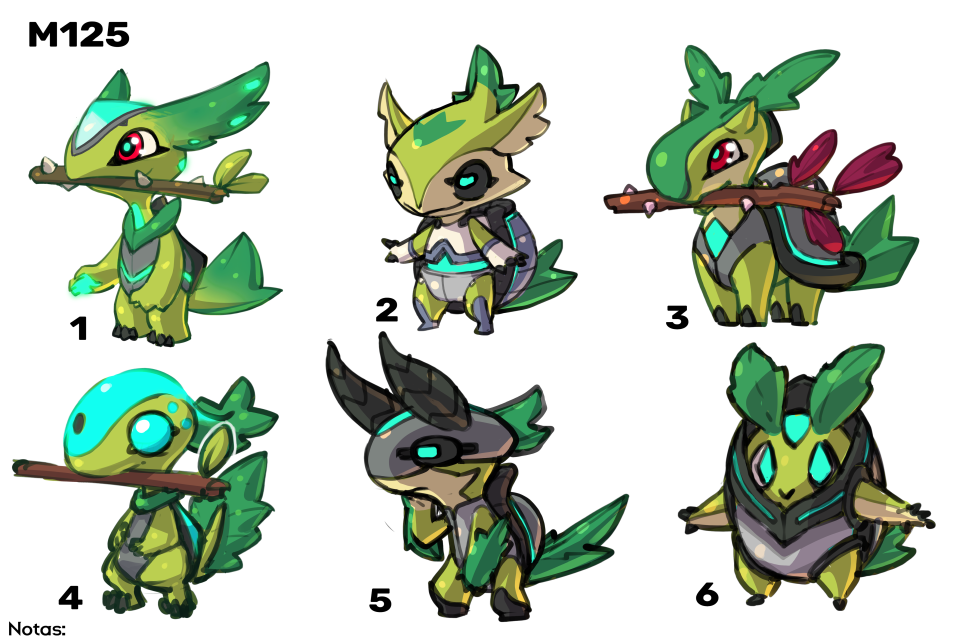 Following Tutorxic’s feedback, and a couple of iterations later, we went with the head of #5, the body and eyes of #2, and the stick from #3. And that’s how the little dude was born. Here’s a rough sketch from the time, and the final concept turnarounds: 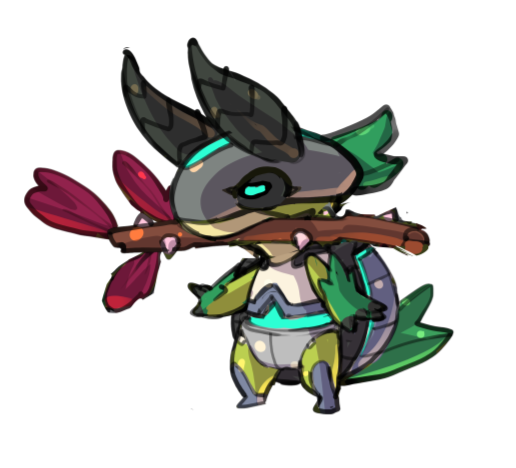 Similarly, these were the designs we created for its final stage. The color palette changed to accommodate and better represent the Mental type.

Tutorxic wanted to try a mix betweent #2 and #4, while keeping the stick placement from #1. He really liked the idea of a doll bursting at the seams, with the stuffing spilling out, so the final design incorporated that bit. Here’s the big dude’s final sketch and concept turnarounds: 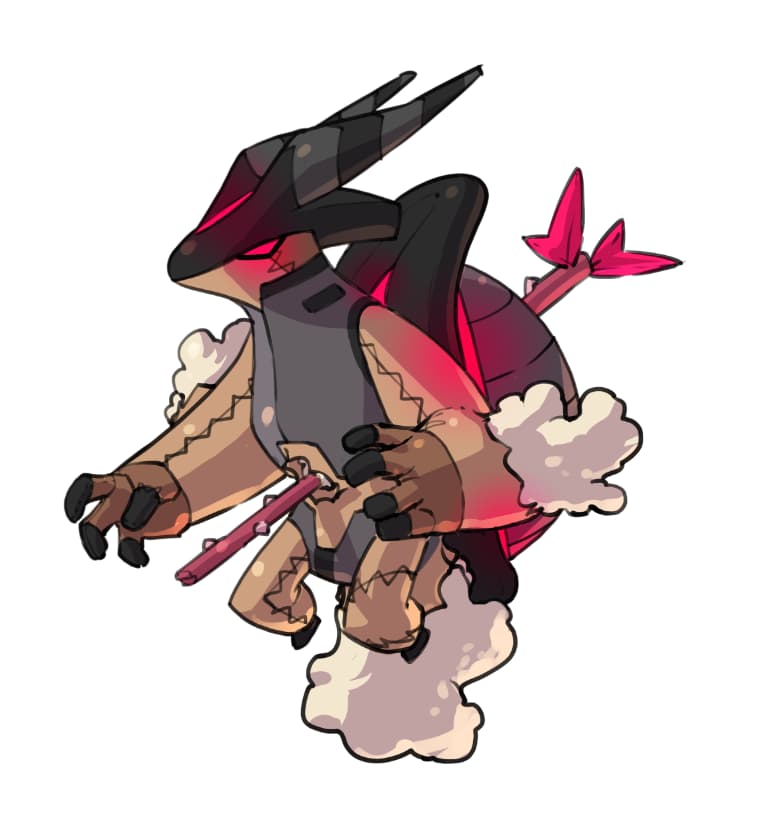 As for their names, we started from Tutorxic’s initial desire of having them be based off Tortoise or Turtle. The first stage had to cover a cute word or theme, while he wanted the final stage to include “Loa”, the good spirits of Voodoo in some regions. We were trying to avoid having another tem name start with “Tu-“, because the Tuwai line has completely monopolized that syllable. After a lot of brainstorming and back and forth, we reached Pupoise (puppy + tortoise) and Loatle (Loa + turtle).

The choice of Luma colors followed a very simple decision process: Tutorxic gave us free way for it, we tested some palettes and really liked the way purple looked. So we gave them purple lumas. Sometimes game dev really is as simple as that. 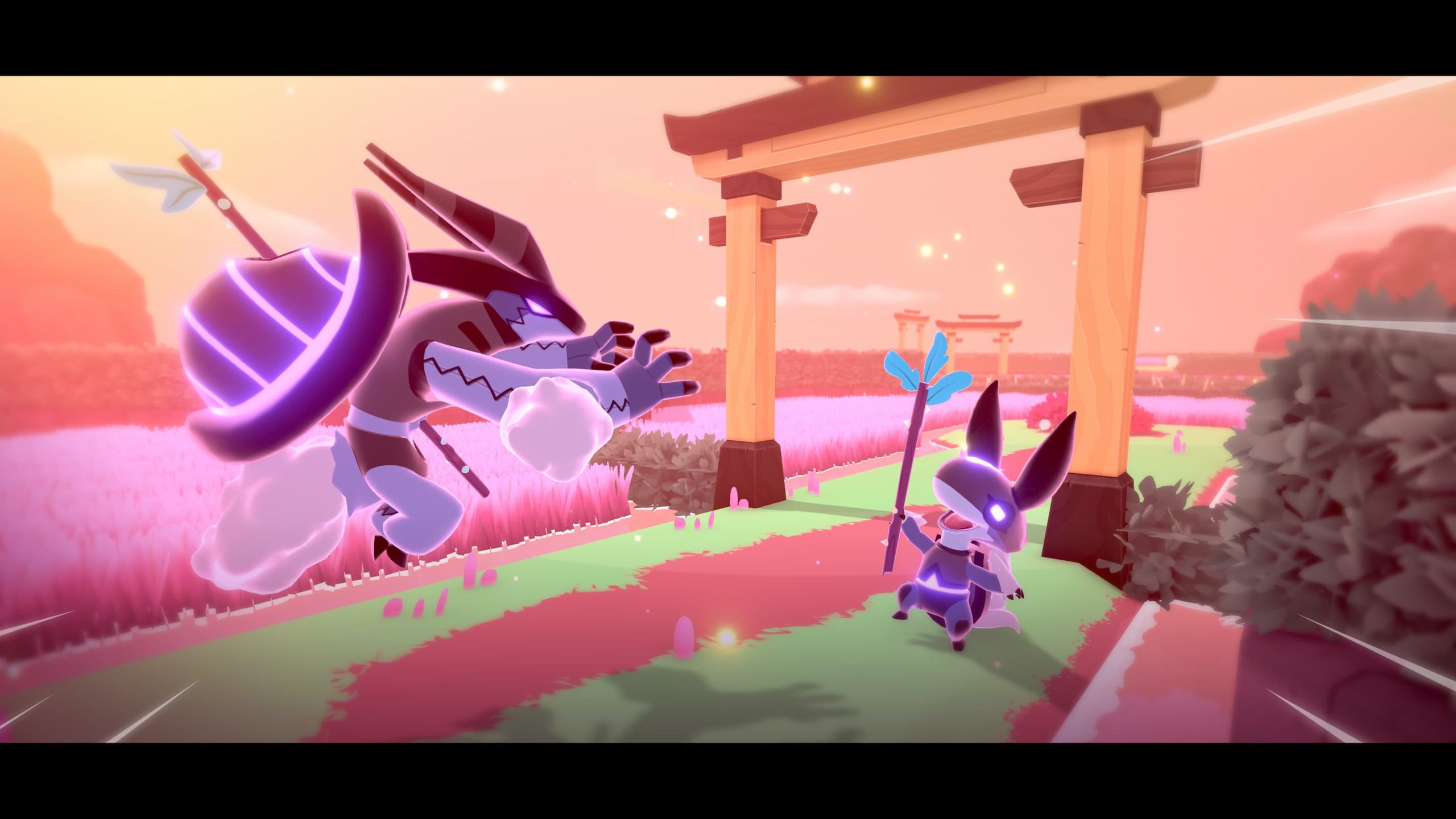 This new route, accessible from Tucma, was thought up by Soma, the same Breeder who conceived the Volarend line. To get to the Gardens of Azatlan you’ll need to take the new elevator in the Tucma Airport. This elevator, that didn’t exist before and was added for the specific purpose of this route. will take you down to a lower level, a new zone that stands just above the mist, closely surrounded by it.

This is how the entryway was designed: 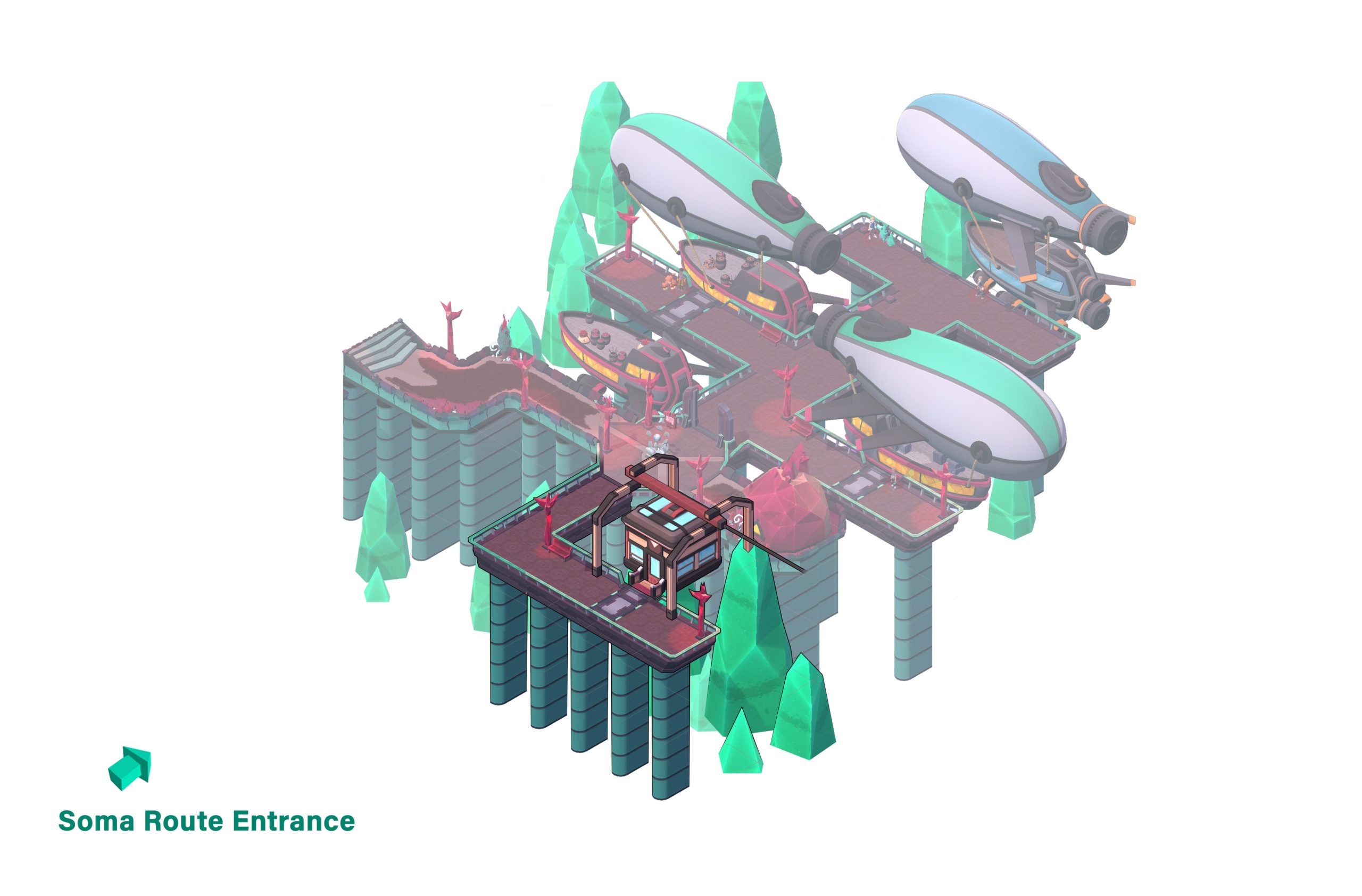 And this is its final look in-game: 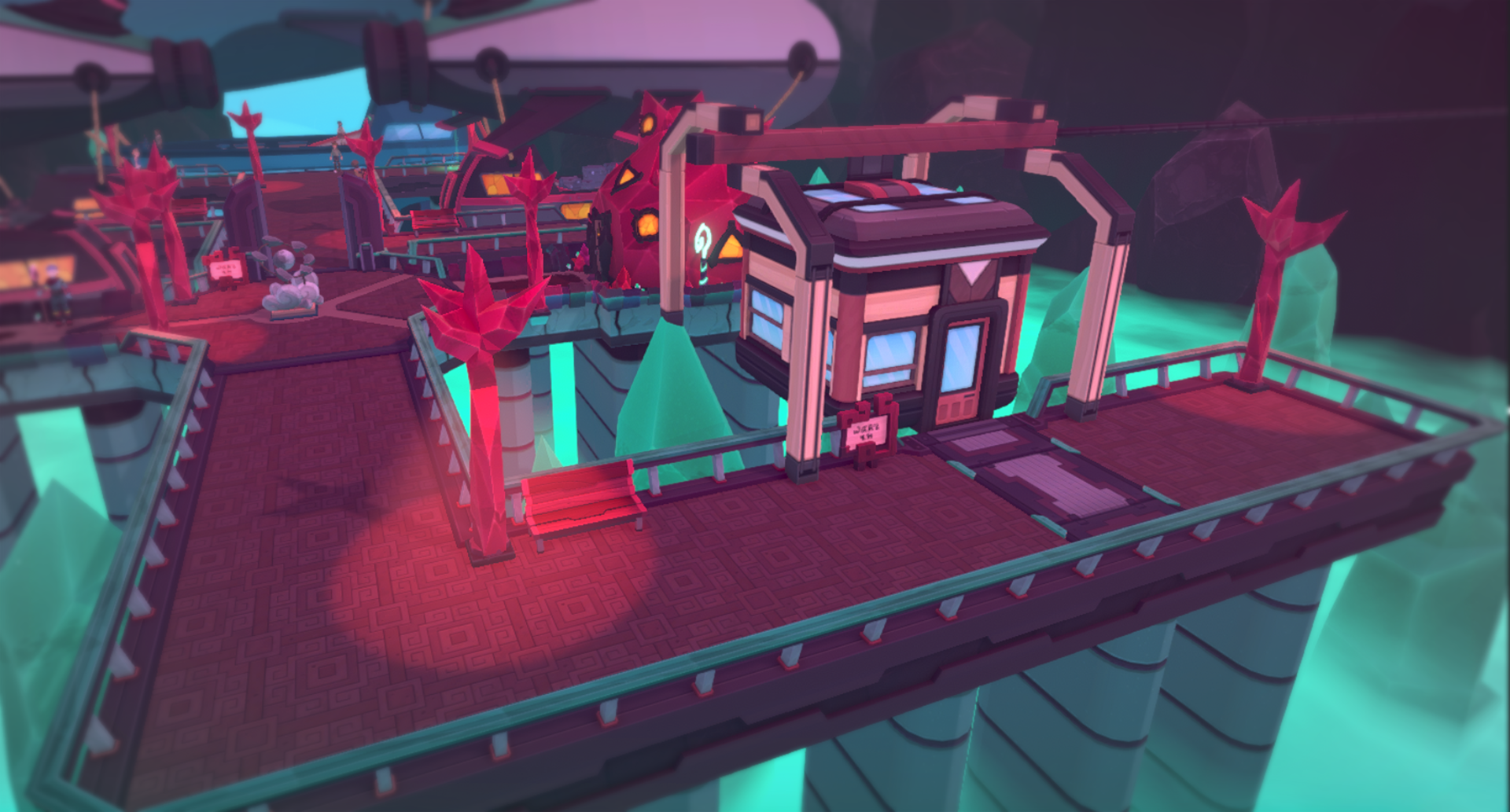 For the first part of the route Soma wanted a crystal path surrounded by trees. The one quirk? He wanted the path to be multicolored. Just like what happened with the snow in Kilima peaks, it was a first for us and for Temtem. The natural inspiration behind this part are the coastal and swampland areas of Louisiana, in the US, but with a crystal aesthetic. The trees resemble the great swamp cypresses that grow from the murky water, and flank the boardwalk path with their special colors. Whether there’s a special meaning to the shape of the path or not is a mystery.

As you walk amidst the floating lights and the falling petals, and across the crystal patch, you’ll reach a more open zone. The highlight of this part is the tall tree standing on top of the hill, crystallized like the rest but with a greater amount of detail. A similar tree has been growing in Soma’s backyard ever since he was young. You’ll be able to battle Soma there! 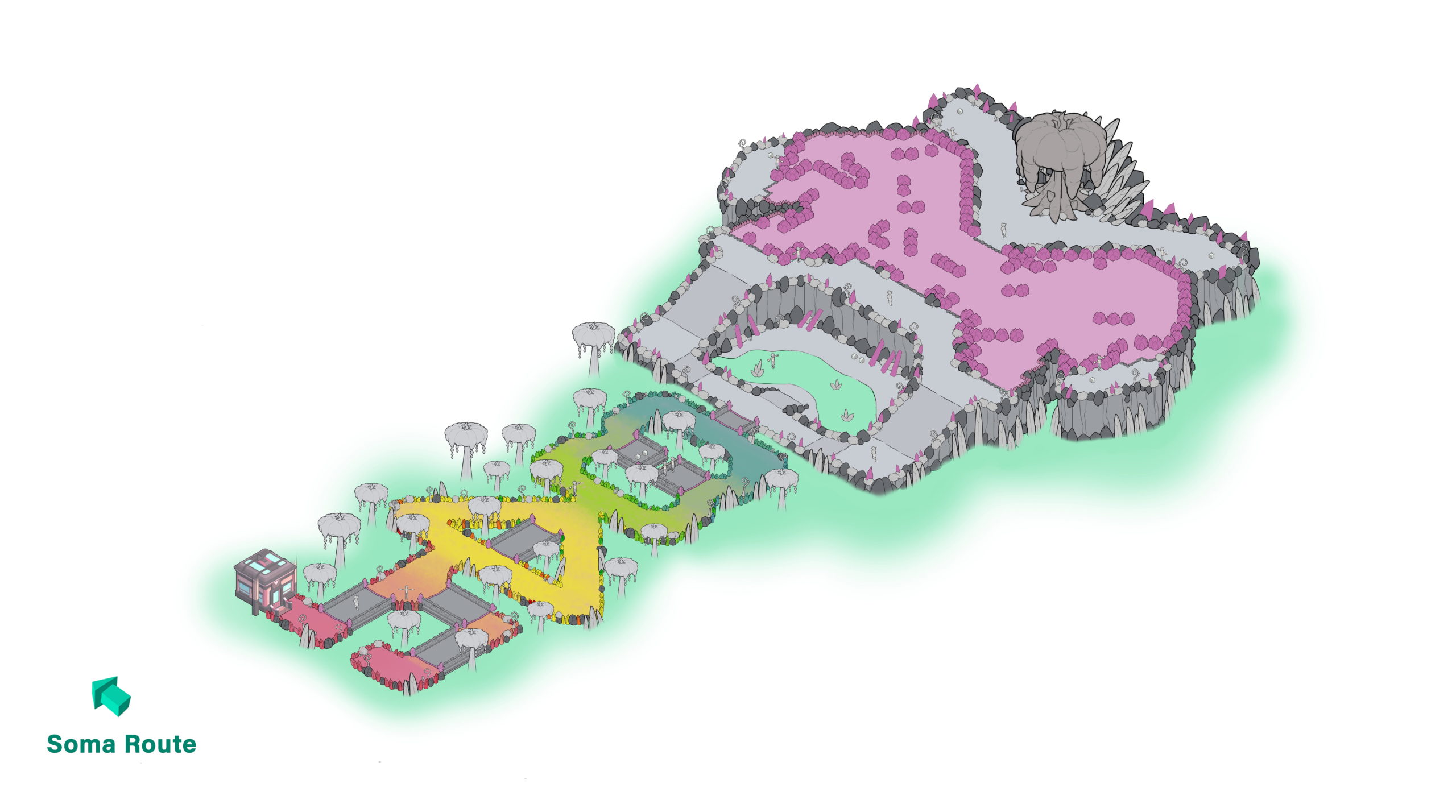 And this is the final in-game look: 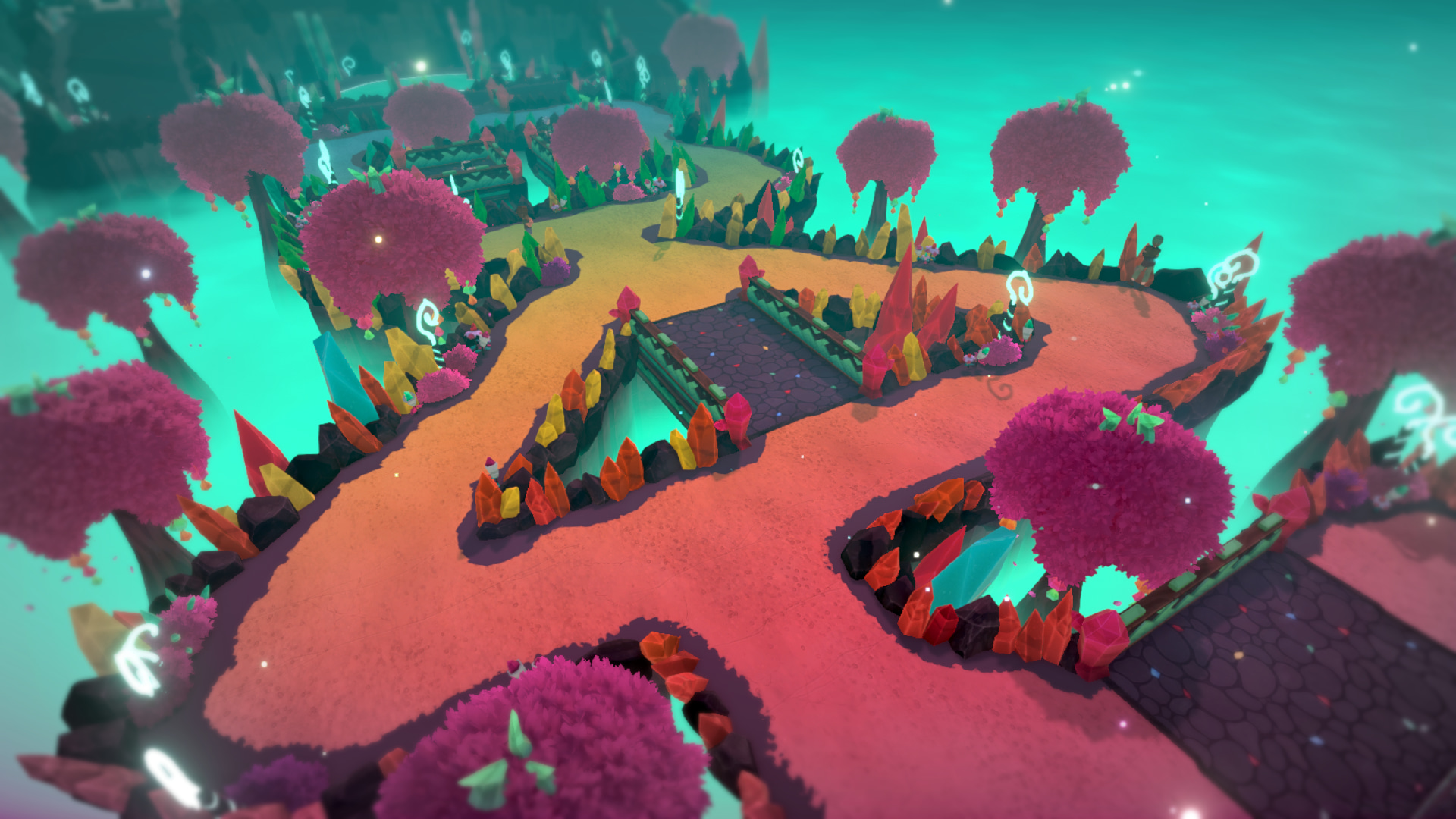 That’s it for this entry on Breeder content! We hope you’ve enjoyed seeing the before and after of the new route and tems.

We have a bit of glum info to share on this matter: due to unfortunate and unforeseen circumstances regarding the design process, we will not be moving forward with the tem and route from the remaining Breeder Backer. For the past two years we’ve been trying to reach a point where both parties were satisfied, but ultimately we’ve been unable to and now there’s simply not enough time to continue with the process. After talking it out with the Backer, we’ll take over and go with one of our internal designs to fill that Temtem slot and route. This also means that there’s only one Breeder route left now. Please look forward to it!

As for us, we’re working hard on the latest update of the Cipanku cycle. It will include new quests, new gears, interesting QOL improvements, and if you play with a controller you might wanna hold it tighter after the patch ? See you next time with that!